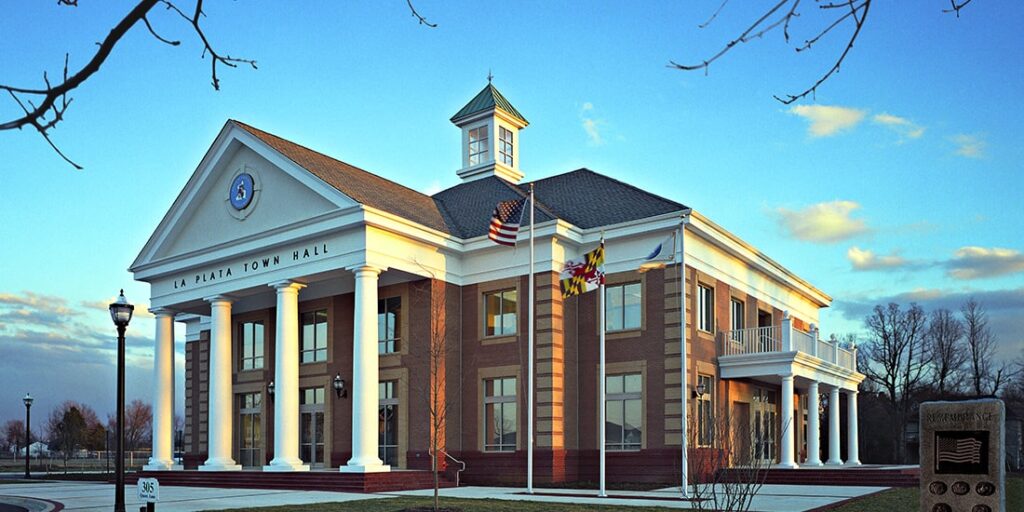 La Plata Town Hall, the Charles County seat’s brick masterpiece, with white columns and a soaring cupola that was built after a tornado devastated the town, has been certified as Southern Maryland’s first “green” building.

La Plata Town Hall, the Charles County seat’s brick masterpiece, with white columns and a soaring cupola that was built after a tornado devastated the town, has been certified as Southern Maryland’s first “green” building.

The designation by the U.S. Green Building Council means Town Hall is among the nation’s most energy-efficient buildings. So-called green construction is increasingly popular across the country as developers and architects try to control energy consumption in office buildings, homes and schools amid concerns over rising energy costs and the dangers of global warming.

In Southern Maryland, the Chaney Enterprises headquarters in Waldorf and a higher education building in St. Mary’s City have applied for the council’s Leadership in Energy and Environmental Design, or LEED, certification.

Officials say they hope to design new developments, including the energetics technology park slated for Indian Head and the high school planned for Charles County, with green construction.

“This is like a tidal wave that is hitting everything,” said Charles W. McPherson, chief operating officer at Facchina Construction, the Charles County developer that built La Plata’s $2.6 million Town Hall, which opened in 2005.

“All of a sudden, everybody’s got to do LEEDs,” McPherson said. “If you don’t go LEEDs, you’re dead. Everybody wants it. It’s a big push to have it. Tenants want it now.”

“The ratings system is like a nutrition label for the building,” said Ashley Katz, a spokeswoman for the Green Building Council, a Washington nonprofit organization.

“We’ve seen tremendous growth,” Katz said. “It’s beneficial for not only the environment but it also has economic benefits and health and community benefits. Economic benefits really come from the reduction in energy and electricity consumption.”

“You’ve got to,” Cooper said. “We can’t continue to operate the way we’ve been operating, not with the fossil fuels and global warming and polluting our waterways. We’ve got to change. It’s not something that’s even questionable anymore. It’s a must. It has to happen.”

“It’s more expensive in the beginning, but it’s cheaper in the long run because your fuel sales are much less,” Cooper said.

McPherson, whose company is building a $350 million LEED-certified condominium tower in Arlington, said it is becoming less costly to construct green buildings because the premium on energy efficient materials is decreasing.

“They’re just getting more efficient at building these products,” he said. “It’s more cost effective today than it was two years ago. Hopefully in time, as more buildings are built with LEED certification and there’s more product on the market, hopefully that premium will get smaller and smaller and smaller.”